In August 1933, the members of the North Carolina State Firemen’s Association went on record as favoring standard hose threads for all fire departments in the state. This would aid in mutual aid situations, so visiting apparatus could connect with a particular town or city’s apparatus and water system. A committee was formed on the matter, with State Fire Marshal Sherwood Brockwell as chairman.

In August 1934, Brockwell gave a report on the project, which was undertaken with the sponsorship of the Southeastern Fire Underwriters Association and the Factory [Mutual Insurance] Association[1]. They provided the free services of an engineer named Mr. Ballard, who either performed the thread changes or provided instruction on changing the threads to National Standard.

Mr. Ballard told attendees that they had just completed the City of Charlotte. He also noted that private fire departments, such as “the mills,” were also cooperated. Chief Hildebrand of Canton chimed in, and said that the nearby Champion Fiber Company performed the conversion.

Praising Mr. Ballard, the Chief said though “he looks like one of those drug store fellows,” once he started his work “he does not know when to quite.” When the help of “four men that I gave him,” he changed all of the company’s couplings in two days and “did all the rest of the work.”

Added Chief Hildebrand, “it is worth any town’s or any private concern’s money to have that standardization made.”

Mr. Ballard said that the National Standard thread measured 31/16 inches outside diameter and 7 1/2 threads to the inch. The cost of materials ranged from about $200 to $300 for the city of Durham, as he recalled, to an estimated $10 or $15 for a town the size of Roxboro.

[1] The name of the second sponsor is incomplete in the proceedings, noting only Factory _____________ Association. Most likely, that was the Factory Mutual Insurance Association.

Reports on Cities and Towns

From the proceedings of the 1934 conference, Brockwell’s report included this information:

Brockwell opened his report with this historical perspective on hose thread standards:

“Now, in 1876 the International Association of Fire Chiefs promulgated and started a movement to standardize fire-hose threads throughout the
United States and Canada.”

“In 1906, following the Baltimore fire, the National Board of Fire Underwriters undertook, with some degree of success, standardizing the hose threads throughout the United States.”

“In 1910 the National Fire Protection Association started a program and met with a certain measure of success in standardizing fire-hose threads throughout this country.”

“In 1915 the Greenfield Tap & Die Company perfected a process by which they could standardize your own threads and your own coupling if they were within a certain range.”

Here’s a 2014 blog post by Legeros, on the history of Raleigh’s hose threads, and the threads of other state departments in the early 1920s and 1930s.

Many decades later, the town of Cary converted to National Standard threads. From this Legeros history page:

December 1980 – Threads changed on 900 fire hydrants in town during a seven-day period. The project cost about $41,000. To expedite the program each hydrant was assigned a number. The town was divided into quarters, and then into routes. Firefighters were divided into teams to install the threads on the hydrants, hoses, and trucks. The existing threads originally matched Raleigh’s, and for the assumed purpose of mutual aid, if Raleigh responded to Cary. The threads later evolved into a different “Cary thread,” and both types were in use. By changing to national standard, there were several benefits: developers could purchase fire hydrants without special ordering. These hydrants would be delivered faster. And the fire department could order new hose couplings faster, without customization. The new equipment was provided by Zimmerman and Evans Fire and Safety in Greensboro. 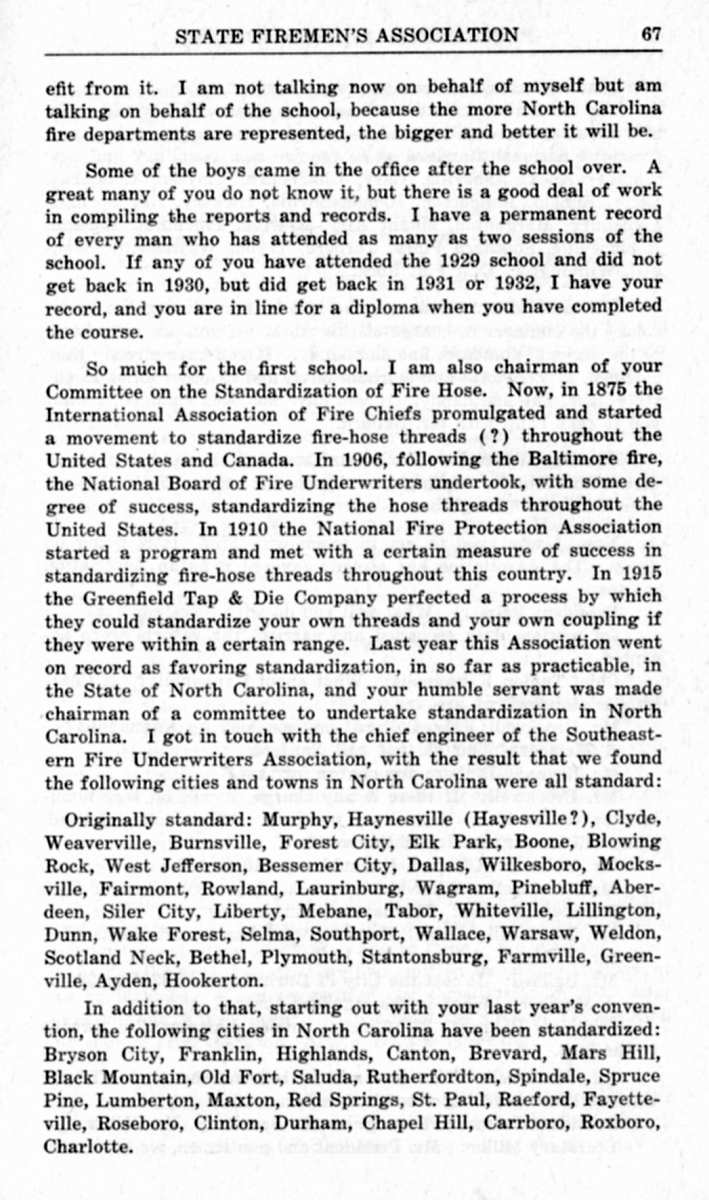